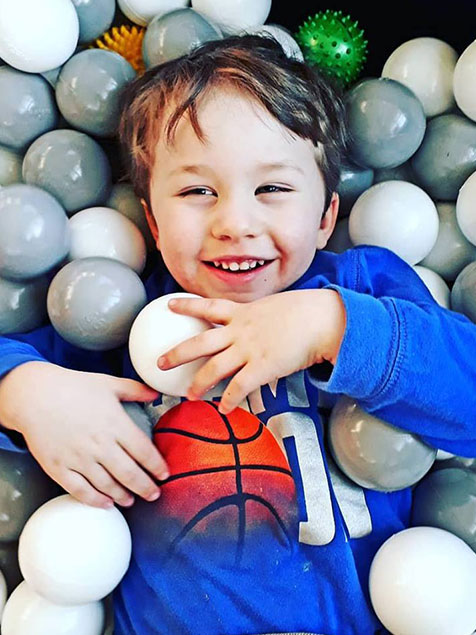 Meet Martin a 3-year-old happy, little boy, who loves to wiggle, dance, and spend time with his Momma, Dada and older Sissy– who chose his name “Marty”.

Marty was born a seemingly healthy full-term baby boy weighting 8 lbs. 14 oz., who was easy-going and developing on schedule. Our only area of first concern was at 4 months old Marty's sleep started to regress and by his first birthday he was waking nearly every hour. During his first year Marty fell slightly behind in meeting his developmental milestones for sitting and crawling, but was babbling and said his first word “duck” early.

It wasn’t until 17 months old when Marty has his first seizure that his developmental delays began to take notice. After visiting the first-time seizure clinic in Baltimore, Maryland Marty was dismissed after his EEG came back normal. Exactly one month later in September of 2017, Marty had multiple seizures that clustered back to back and was admitted to the hospital. After starting an anticonvulsant and scheduling further testing we were sent home with many unanswered questions. Exactly two weeks later, Marty had another cluster of seizures and was readmitted to the hospital. Following his seizure clusters, Marty had setbacks in his fine and gross motor development and has made slow progress since. Later seeing multiple specialists and undergoing more testing Marty was diagnosed with focal epilepsy, global developmental delay, a sleep disorder, and autism spectrum disorder level 3.

In May of 2018, Marty received his genetic testing results finding one DNA letter coding change (G to C) found on the SCN2A gene. This change was spontaneous and not passed down from his parents. There is no cure, only recommendations for managing symptoms associated with SCN2A disorders. Marty is currently being followed by: neurologist, neuropsychologist, sleep specialists, ophthalmologist, occupational, speech, & physical therapists, and soon to start ABA therapy full-time.

After receiving Marty’s SCN2A diagnoses, our genetic counselor referred us to the FamilieSCN2A Foundation for more information and support. The Foundation has been a second family to us not only for emotional support, but encouragement, recommendations for managing care, and inspiration for finding a cure for our children.

In October of 2018, six months after receiving Marty’s SCN2A diagnose we organized a team on behalf of the FamilieSCN2A Foundation to run in the Baltimore Running Festival, which is the largest run on the East Coast. We plan to continue to advocate for our son and other children and their families affected by SCN2A.