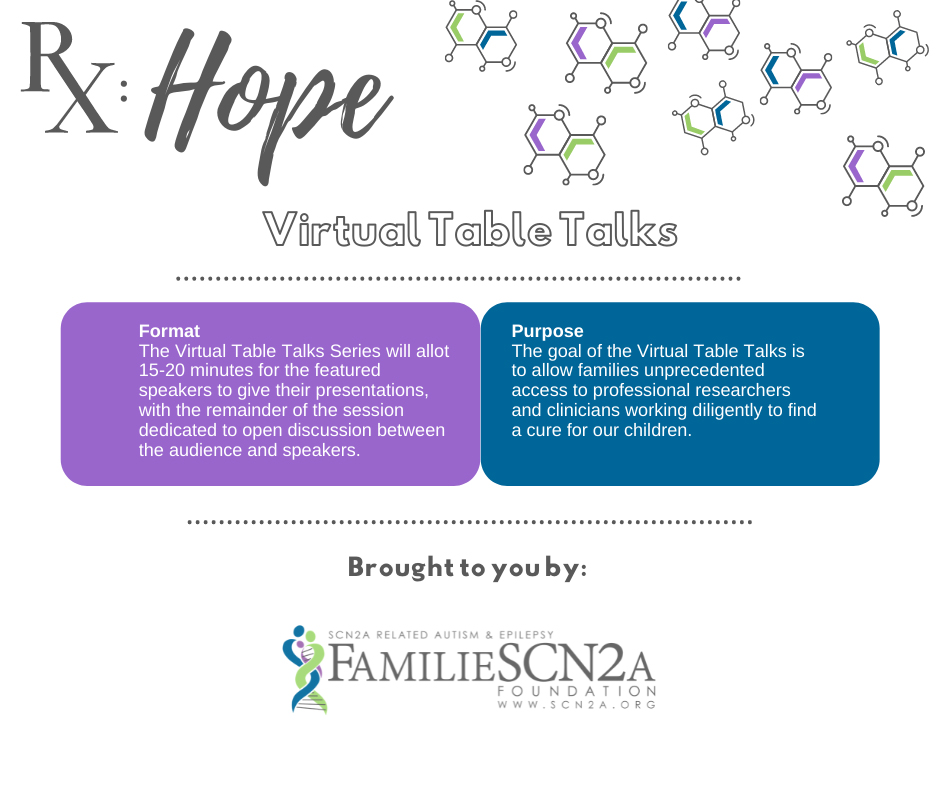 Although disappointed we will not be able to gather in person this year due to COVID-19, we are excited to offer the Rx: Hope Virtual Series. The results of our survey showed the community is experiencing Zoom and live webinar fatigue, so we will pre-record all presentations and you can view them from the safety and convenience of your own home, in your own time. Questions will be collected ahead of time and answers provided at the end of each presentation. The goal of this virtual series is to instill HOPE for our children's future.

The FamilieSCN2A Foundation lives by our mission statement and part of that mission is to provide educational and emotional support for those affected by SCN2A disorders. Our active online community serves as a source of comfort and strength. If you are not already a member, please request to join here: www.scn2a.org/global.html . We feel strongly that knowledge is power. Our hope is that by the end of the series you will feel empowered to advocate for the best possible quality of care for your child. It is hard to be the expert in your child's disease, so we welcome and encourage you to invite your treating clinicians to register and learn along with you.

When creating this virtual series we took into consideration the topics that were in highest demand from our community survey. In accordance with survey results, the five presentations in this series will focus on: research updates, understanding your child's specific genetic change, and the SCN2A specific therapeutic pipeline, including a realistic view and timeline of each of the new treatments in preclinical phases. The full, detailed agenda will be posted soon.

Abstract: Determining the functional consequences of SCN2A variants helps with assessments of pathogenicity (likelihood of disease causality), provides clues about molecular mechanisms responsible for epilepsy or neurodevelopmental disorders, and offers guidance regarding drug therapy. We are using an automated electrophysiology platform (Syncropatch; @DasMachineNU) to perform functional and pharmacological evaluations of SCN2A variants, and have demonstrated close agreement of results using this system with that of a traditional method (manual patch clamp recording). In a recent study we determined the function of 28 SCN2A variants associated with either early (before age 1 month) or later (older than 6 months) onset seizure/neurodevelopmental disorders. This study measured more than 12 specific functional properties of each variant, which were constructed in two alternative versions of the channel representing the one expressed during early brain development or the version most prominent in the brains of older infants and during later ages. The variants we studied exhibited multiple patterns of dysfunction often with mixtures of ‘gain’ and ‘loss’ among the measured parameters. Our data illustrate the challenges of categorizing SCN2A variants using a simple binary (gain vs loss) classification scheme. We hope our new approach for studying SCN2A variants will enable expanded determination of the functional consequences of many more variants and provide the knowledge needed for guiding precision medicine.

Title: Understanding how brain cells and circuits are affected by SCN2A loss-of-function

Abstract: As members of the family group know all too well, a child diagnosed with an SCN2A Disorder can suffer from a range of symptoms, including epilepsy, developmental delay, autonomic dysfunction, movement disorders, corticovisual impairments, and autism spectrum disorder. Using extremely broad strokes, children fall largely into two categories depending on whether their SCN2A gene is altered in a way that makes NaV1.2 channels over-active or not active enough. These alterations are termed gain- and loss-of-function, respectively. Typically, gain-of-function variants are associated with epilepsy that begins very early in life. Children with loss-of-function variants are more commonly associated with autism and developmental delay, with the possibility of seizure later in life.

Our lab has sought to understand how loss-of-function affects individual brain cells (neurons) and neuronal circuitry, using mouse models where we can control Scn2a gene expression. Using such models, we have found that loss of NaV1.2 channels affects a wide range of cells and circuits, and that a common feature of Scn2a loss is an impairment in learning at the cellular level. Furthermore, we have found that these impairments are present throughout life in mouse models, and that they appear to be reversible if Scn2a gene expression is restored to normal levels. Here, Dr. Bender will describe how NaV1.2 loss affects various brain circuits and further describe efforts to develop new therapeutic approaches designed to restore NaV1.2 to normal levels in cases of NaV1.2 loss.

Abstract: Dr. Wendy Chung will present updated information collected through the Simons Searchlight SCN2A research registry, including genetic variants, medical diagnoses, developmental/behavioral challenges and medication use. Dr. Chung, MD, PhD is an ABMG board certified clinical and molecular geneticist with over 20 years of experience in human genetic research. She is the Kennedy Family Professor of Pediatrics and Medicine and the Chief of Clinical Genetics at Columbia University, the Director of Clinical Research at SFARI and the Simons Foundation and the Principal Investigator of Simons Searchlight.

Abstract: Gene therapy approaches for the conversion of premature termination codons (PTCs) in SCN2A are currently limited. Christopher Ahern and colleagues have developed a universal approach whereby engineered transfer RNAs (tRNAs) can be used to efficiently correct SCN2A PTCs in vitro and in vivo. Their current preclinical study will employ an adeno-associated virus to deliver these small RNA therapeutics to induced pluripotent stem cell-derived cortical cells from individuals who are known to have nonsense mutations in SCN2A to begin to overcome existing technical challenges for a one-time cure for SCN2A channelopathies that involve PTCs.

Abstract: The Meyer lab uses state-of-the-art reprogramming methods to generate cells of the nervous system from patient skin cells. We use these cells to study the disease and the impact of different mutations on cellular health. Moreover, we are also involved in testing potential therapeutic strategies. In particular, we are working on several potential gene therapy strategies to address both gain and loss of function mutations. In this presentation, we will discuss different potential approaches as well as risks and benefits.

Abstract: Praxis Precision Medicines is developing new medicines for patients and families affected by brain disorders including: genetic epilepsies, psychiatric diseases, movement disorders, and pain syndromes. This is an opportunity to learn more about Praxis and the PRAX-222 program: an experimental antisense oligonucleotide being investigated for use in children with gain of function mutations in the SCN2A gene.

Title: Data, Data, Data - What do they mean by evidence?

Thank You To Our Sponsors! 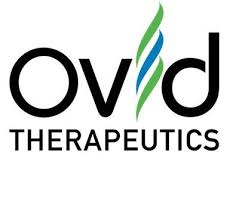