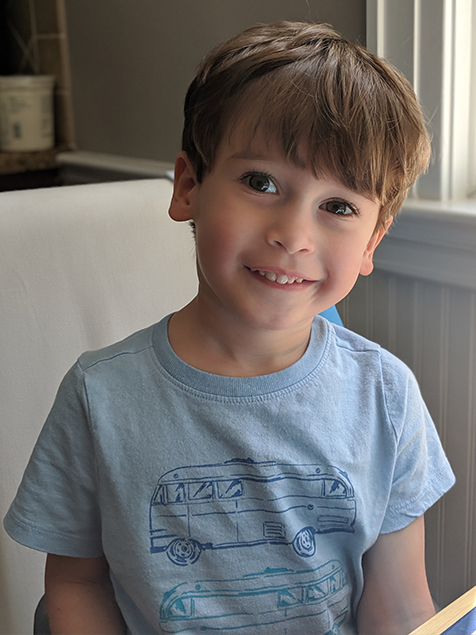 Hi, I’m Harry and I am from Garden City, New York.

Our SCN2A warrior Harrison (Harry for short), is a warm and loving little boy, who loves to give "squeezies" (hugs), play with cars and trains, do puzzles, and to count anything and everything he can find. When not watching "live action" train videos, Harry enjoys curling up in his bean bag chair, with his weighted blanket and a puzzle game on his iPad.

Harry was born in 2015, at 37 weeks after a normal pregnancy and showed no signs of health issues at birth. As Harry grew, he started to show signs of developmental delay and by 9 months old, when he was not yet sitting up independently, Harry started in Early Intervention. By 18 months old, Harry was receiving PT, OT, Speech and Special Education services.

In January 2018, at 26 months old, Harry had his first seizure. In the four months that followed Harry's first seizure, Harry was diagnosed with autism spectrum disorder, apraxia, dyspraxia and an SCN2A mutation. Harry is now enrolled full time in a full time special education program with a 1:1 aid, and receives PT, OT, and speech (including PROMPT therapy) 10 times per week! He's a hard working little boy, who never stops smiling!