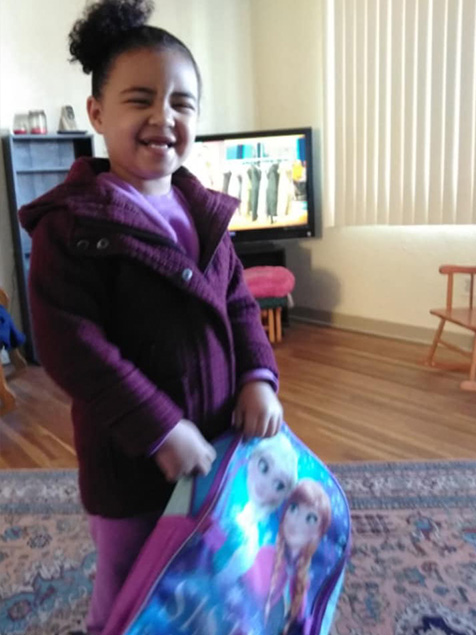 Athena loves anything mechanical to see how things work. She loves learning hands on and being a little social butterfly everywhere she goes.

Athena was born a little tiny peanut at only 4 pounds 10 ounces. Other than being tiny, she seemed rather healthy. They sent us home although she wouldn't eat much and she kept having these weird jerks (infantile spasms) that didn't seem to alarm anybody (but ME). The jerks continued, I took her in to see the Dr multiple times with my concerns and finally took her to the ER and refused to leave until testing was done. This was not "normal baby things" as the Dr's said, they were indeed seizures. Up to 50 per day if not more. We were then admitted for 2 weeks, trying multiple medications, running tons of tests, the unknowns were SCARY to say the least. We finally gained better control on Tegretol and it's been a whirlwind of therapies, dr's appointments, more tests, the list goes on. FINALLY in 2016 we insisted on genetic testing and the results were life changing. All of the hoping that this would eventually stop or that "she'd grow out of it" were gone. She has SCN2A. It all made sense. She began walking after the start of hemp oil at 3.5 years old. She has thrived since despite the roughly 25-30 seizures that she still has per year. She's working so hard on talking, she uses a lot of sign language for now. It's true what they say, inchstones do turn to milestones. We hope to gain better seizure control as time goes by, but couldn't be more proud of how determined she is in the life she has been given and how far she has come!