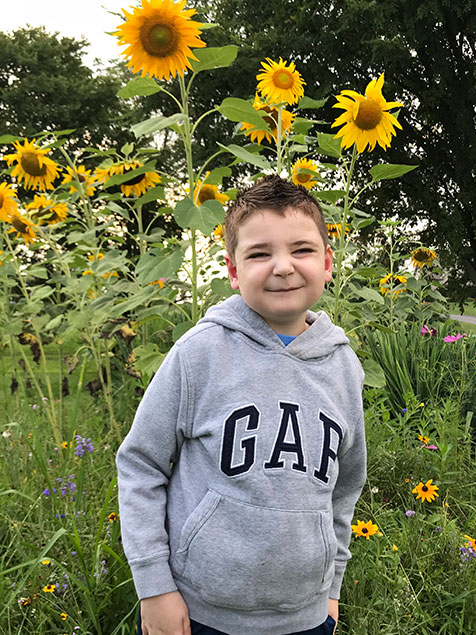 I am a serial hugger!

Benjamin, known to all that love him as Ben, is an adorable 8 year old that resides in Gettysburg, PA with his mom, Leah Schust, dad, Brant Myers and his grandmother, Suzanne Schust (A.K.A Mimi.) His family waited a long time for a baby and when Ben was born, their lives and hearts were full and complete.

Ben was the most beautiful baby in the nursery, fact, not bias. His first year was spent being loved and spoiled as all babies should be. He was meeting milestones and was walking on his first birthday! One short month later, he began to regress developmentally and had his first seizure at 13 months old.

For the next year, Ben had hundreds of seizures a day and lost every skill he learned in his first year. He regressed back to a newborn and the doctors prepared his family for the worst. Even if he did live, he would never walk, talk, or have any quality of life. So his parents did what any parent would do, they left those doctors and got a second, and a third opinion.

They travelled all over the US and finally found a team of doctors who refused to give up on their baby. The new team also was able to identify the cause of Ben's illness, an extremely rare, genetic disorder called SCN2A. His mom and dad do not have the genetic change, it was a spontaneous mutation which makes it even harder to understand. Ben went through years of grueling tests, treatments and many, many drugs but they finally found a combination that worked and his seizures are well controlled now.

The seizures caused a lot of damage to Ben's developing brain which left him severely disabled, both physically and developmentally. Ben lost the ability to eat and had a feeding tube placed. He has a long list of diagnosis that are caused by the SCN2A Disorder, including Autonomic Dysfunction, Scoliosis, Cortical Blindness, and Autism. Despite all of the health challenges this little boy faces, he perseveres. He has proved that he CAN walk, CAN learn and CAN have an amazing quality of life.

His family supports him through countless hours of therapy and doctor appointments to keep him progressing. Their advocacy for Ben goes beyond just making sure his needs are met and his potential is achieved. All of their extra time goes into the FamilieSCN2A Foundation where Mom serves as President and Dad as an advocate driving cooperate sponsorship.